Some titles jump out as collections grow in the Charnice Milton Community Bookstore. The Constraint of Race: Legacies of White Skin Privilege in America is one of those books. And clearly a previous reader couldn’t resist commenting on one of the historic episodes described: Passage of Clinton’s 1994 crime bill, and the role of the Congressional Black Caucus.

Having the company of previous readers, especially if they left evidence of how the reading affected them, is a great benefit of reading a used copy!

The Constraint of Race flips the usual script on race to look at the benefits of “white skin privilege,” rather than focusing on “disadvantages suffered by blacks in the American welfare state.” In highlighting white skin privileges, Williams wanted “to help undermine their acceptance as ‘normal,’” her publisher explains, “and motivate renewed efforts toward achieving a more just and equitable society.” The writing is accessible and clear. The topic immensely important.

Linda Faye Williams touched many in the DC area, through her years at Howard University and the University of Maryland, as well as her time Institute for Policy Research and Education at the Congressional Black Caucus Foundation. This book, completed a few years before her death in 2006, continues to touch many others. 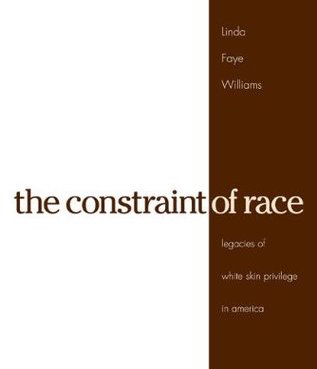 Virginia blogs on general stuff a vspatz.net and more Jewish topics at "A Song Every Day. Manages WeLuvBooks.org. CommunitythruCovid.com is on hiatus. View more posts